GADIM, a disability in media initiative, launched at the UN Social Forum in 2016 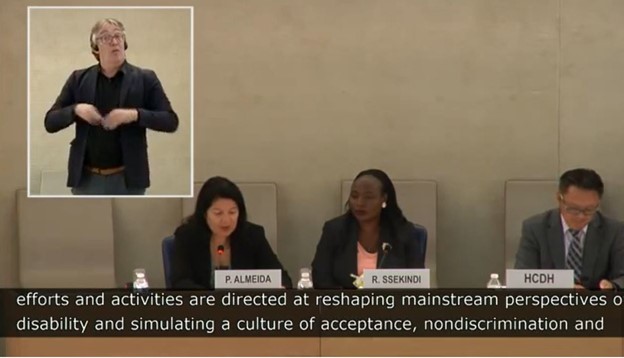 (GADIM) began in 2016 to mark the 10th anniversary of the UN Convention on the Rights of Persons with Disabilities (CRPD). GADIM recognizes that the news and entertainment media have the potential to play pivotal roles in supporting human rights for persons with disabilities and eliminating barriers that diminish those rights.

Patricia Almeida, creator and co-founder of GADIM, participated in the official program of the Social Forum 2016 at the United Nations in Geneva, Switzerland, to launch GADIM. She spoke on a panel on the “Implementation of Agenda 2030 under the Convention on the Rights of Persons with Disabilities: The Future We Want,” which focused on the role of the media in relation to the realization of human rights for persons with disabilities.

Almeida explained how the media can be used as a tool to break disability stereotypes and to combat the ableism in a society that devalues persons with disabilities.

She cited positive examples of social marketing through media, such as the 2006-2007 Brazilian soap opera, “Pages of Life” (“Páginas da Vida”), from TV Globo, which used disability consultants in the development of characters and storylines and hired a girl with Down syndrome to play a character with Down syndrome on the show. The character was so popular that it helped create a widespread discussion about inclusive education in Brazil and in the other 90 countries where it was shown.

A captioned and sign language-interpreted video of Almeida’s remarks can be found here: ​https://youtu.be/9wyttX8qAk0

You may read the speech here

Catia Malaquias, co-founder of GADIM, also spoke at the UN Social Forum. She is the founder of Starting with Julius in Australia, which promotes the inclusion of persons with disabilities in advertising in Australia.

She said it is important that persons with disabilities are understood by businesses to be stakeholders, because they are their customers, employees, and suppliers.

“Inclusion in advertising is important because it helps to validate and normalize the participation of people with disability in the community, both as consumers and more generally, and to challenge the stigma, stereotypes and misconceptions that remain significant barriers to the enjoyment of rights,” Malaquias says at Starting with Julius.

A video of Malaquias’ talk is here:

The third co-founder of GADIM is Professor Beth Haller, from the United States, who is an academic expert in news and entertainment media representation of disability.

​GADIM has the support of the first Special Rapporteur on the Rights of Persons with Disabilities, Catalina Devandas Aguilar (2014-2020), and the International Disability Alliance (IDA).