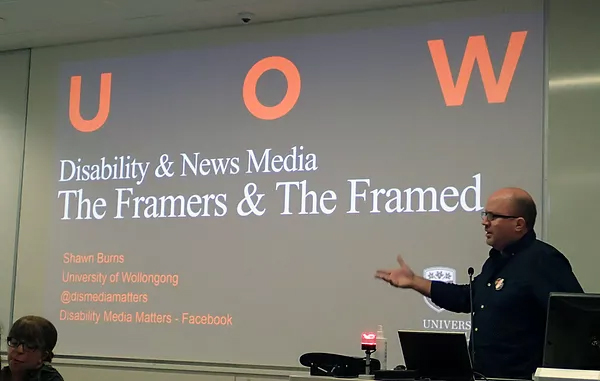 Article about the conference courtesy of Freedom2live

​Authentic representation of disability in the media was the standout concern from those attending the first Disability, Media and Human Rights Conference held recently at Curtin University, Perth. A solution put forward at the conference was to make greater use of social media and for those with disability to use whatever medium possible to agitate for change.

​Not enough is being done to facilitate the inclusion of people with vision and hearing issues, associate professor Katie Ellis, convener of the university’s Critical Disability Research Network told F2L. “In terms of representation Australia is still stuck in the triumph over adversary paradigm. People with disability are usually represented as inspirational just for getting out of bed in the morning.”

Also, the need for audio description was raised, which seems to be a matter of education as many people were unaware of what it is. Audio description offers people who are blind or have limited vision an understanding of what is happening visually within a theatre, cinema, television, film, video, museum or other arts related productions.

​Netflix audio description was presented as a good news story but needed Australian governments to focus on this issue and compel broadcasters to provide it. Other countries are way ahead of Australia in terms of access to the media, particularly for audiences who are blind or vision impaired, with Australia the only OECD country not to offer audio description, Ellis said.

Keynote speaker and blogger, Robyn Lambird said people with disability should be encouraged to get involved in YouTube activism to offer alternative representations. She suggested people take notes of popular hashtags or styles of YouTube videos, such as “A Day in the Life’ formats, and include one from a disability perspective. “That way people interested in the hashtag might just happen upon a disability representation,” Lambird said.

​Another keynote speaker, Professor Beth Haller from Towson University in the US, introduced the concept of ‘inclusion riders,’ a clause added to contracts to ensure equitable hiring practices, an initiative first introduced to increase diversity in filmmaking. An example of this is if 20 per cent of the population has a disability, then 20 per cent of people hired to work on a film, both behind the scenes and in front of the camera, should also have a disability. Haller suggested that if A-List actors began demanding inclusion riders in their contracts then a big increase in diversity in Hollywood films would follow.

Representation is important here because activists worked hard to change the way society views disability by moving away from a charity model towards one where if barriers are removed people with disability can participate in society.

“While we focused on gathering together people with disability and their allies at this event, we will be making a submission to several ministers as a result of the discussions and schedule follow-up meetings,” Ellis said.

Sponsored by the university’s Centre for Human Rights Education and the Global Alliance for Disability in Media and Entertainment (GADIM) the conference was attended by people with disability, academics, activists, media practitioners and students. The event was part of an Australian Research Council funded project Disability and Digital TV: Access, representation and reception.